I recently had the chance to catch up with author, fermentation expert and health strategist, Alex Lewin before he kicks off a busy fall tour of talks and book signings. In part one of the interview we chat about how he first became interested in the traditional food movement and also what motivated him to write Real Food Fermentation—the first ever fully illustrated, step by step guide to creating simple fermented foods at home. Enter Alex... 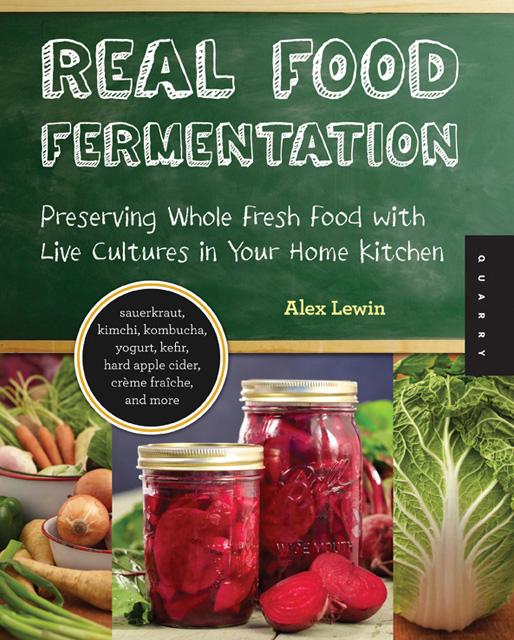 When did you first become interested in traditional cooking and nutrition?

I first got interested in nutrition maybe in the ‘90s. I was at a business meeting at a guy’s house and I asked him if he had any coffee. He gave me a cup but also said, “Alex you know coffee isn’t the best thing for you. Let me send you a book that you might find interesting.” I said, “Ehhh okay sure,” and he sent me a book by—that health guy that looks sort of like Santa Claus—Andrew Weil. I love Andrew Weil, because he emphasizes that stress is a big factor in disease and his way of relieving stress is dancing naked with his dogs. Coming from some serious Harvard MD guy, I think that is just great. But anyway, I read this book, and I think before that I had dismissed “alternative” or integrative health as being unscientific. But then I realized that things become almost more scientific when you start to question the experts. There is this great quote by Richard Feynman: “Science is the belief in the ignorance of experts.” I like that. So this book by Andrew Weil got me questioning the orthodox, mainstream health advice.

At the same time my Dad had struggled with heart disease for a long time. He would go to the doctor and they would give him pills and all that, but it didn’t seem like a complete solution. He died when he was 69, which is sort of in the ballpark of living out all of your years, but he wasn’t very healthy for the last many of them. So I started thinking: okay, what are we supposed to be doing here? I began reading a lot of books about diet and nutrition; books like The Zone Diet and The Blood Type Diet. One of the books would discuss how you need to eat protein, fat and carbohydrates all at the same time, and then the other would state that you must not eat protein, fat and carbohydrates at the same time because your body digests them completely differently.

I was reading all of these books that said different things and yet they all had compelling arguments to back up their claims. This made me even more curious, because this whole health thing started to seem even bigger and more complicated than it had originally. I studied math in college which is pretty big and complicated too, but in math, questions generally have an answer, or at least one can prove that they don't have an answer. Human health seemed like a big problem, so I started digging more and more.

Then one time I was in a bookstore and I saw a book by Sandor Katz called The Revolution Will Not Be Microwaved. I thought that was just awesome because there is a song called "The Revolution Will Not Be Televised" by Gil Scott-Heron, which is a politically radical funk song from the '70s about the collapse of the hegemony. I read it and that was what radicalized me in respect to food. The book provided a really good overview of underground food movements and, among other things, it really got me interested in Sandor Katz. I looked up what else he had written and saw that he had a book called Wild Fermentation. The preface was written by a woman named Sally Fallon, who was quite the writer and sounded very wise. So of course I bought Nourishing Traditions. I let the book sit for awhile, but then found out that Sally Fallon was coming to speak locally, so I heard her and was like, “Wow!” Next I went to the Fourfold Path to Healing Conference out in Western Massachusetts and wrote my first blog post ever about my takeaways from that event.

When I got around to reading the book, I found that the first 60 pages of Nourishing Traditions provided a better explanation of health and nutrition and its connections with food than anything else I had read before. It seemed like the other authors were all sort of nibbling around the edges, but she scored a solid hit on the target. And again, she didn’t answer everything once and for all, but I read that and could see that I was finally getting somewhere.

What made you decide to write a book about fermented foods specifically?

The easy answer to this question is that a publisher called me and said, “Hey, we heard you know a lot about fermentation. Would you like to write a book for us?” I guess I had thought of writing a book before, but that certainly made the process easier.

Outside of that, fermenting is a great entry point into cooking. For people who are intimidated by the kitchen, making sauerkraut is about as easy as anything you are going to do. There are three ingredients and two of them are water and salt, and the equipment is pretty minimal. Fermentation is also a way for people to take back control over their food destiny. It raises your food consciousness. Many of us go through our food lives buying stuff in packages and eating stuff in restaurants. Making your own food has a really different feeling to it and sauerkraut in particular is a gateway to that. I’m not sure that I thought all of this through when I was writing the book, but I certainly felt it.

You talk and write a lot about sustainability as well. How does fermenting play into that conversation?

Well again, I think fermentation develops this sense of consciousness that what you do on earth and with your food has an effect that reaches outside of your immediate circle.

But on a more practical and less touchy-feely level, foods like sauerkraut were originally created so that there were vegetables available to eat during the winter. It wasn’t like someone said, “Let’s ferment cabbage so that it will taste fabulous and then we can pile it on our stew or have it on toasted rye bread.” That’s just not what happened.

For those of us living in rich countries, we can go to the store to buy whatever we want whenever we want it; as long as what we want is one of the handful of major products that are sold in grocery stores that is. But if we were living in an area with less infrastructure, fermenting really would take on this new practical meaning. When you’re homesteading or in a poor country, eating locally isn’t something you do because it is “cool.” You don’t preserve food because it’s hip, you preserve food because it’s something you need down the line. You preserve cabbage because you won’t get any vitamin C in the winter if you don’t.

So to sum it up, fermenting foods ties into this idea of eating locally, which was just a normal part of life and a necessity before it became a fad. Buying things from far away used to be expensive and impossible, and today it still uses up a lot of resources. In so far as eating locally is a big part of sustainability, fermenting can certainly help with that.