While cooking traditional foods is vital at all times of the year, the idea of standing in front of the oven and fanning yourself with a pot-holder on a beautiful afternoon is not always appealing. This summer we have found that bone broths are a perfectly simple and nutritious food for such occasions. Preparing broths or stocks doesn't require a lot of your time- just a bit at the beginning and the end of the process, and with farmer's markets in full swing bone and meat scraps are quite easy to come by. The bulk of the process can be completed unattended, allowing for you to enjoy the sweetness of summer outdoors. For us, the light aroma of bone broth curling up from a tea cup and brimming with zesty fresh herbs has become a treasured breakfast tradition, especially when enjoyed outside on a still August morning. 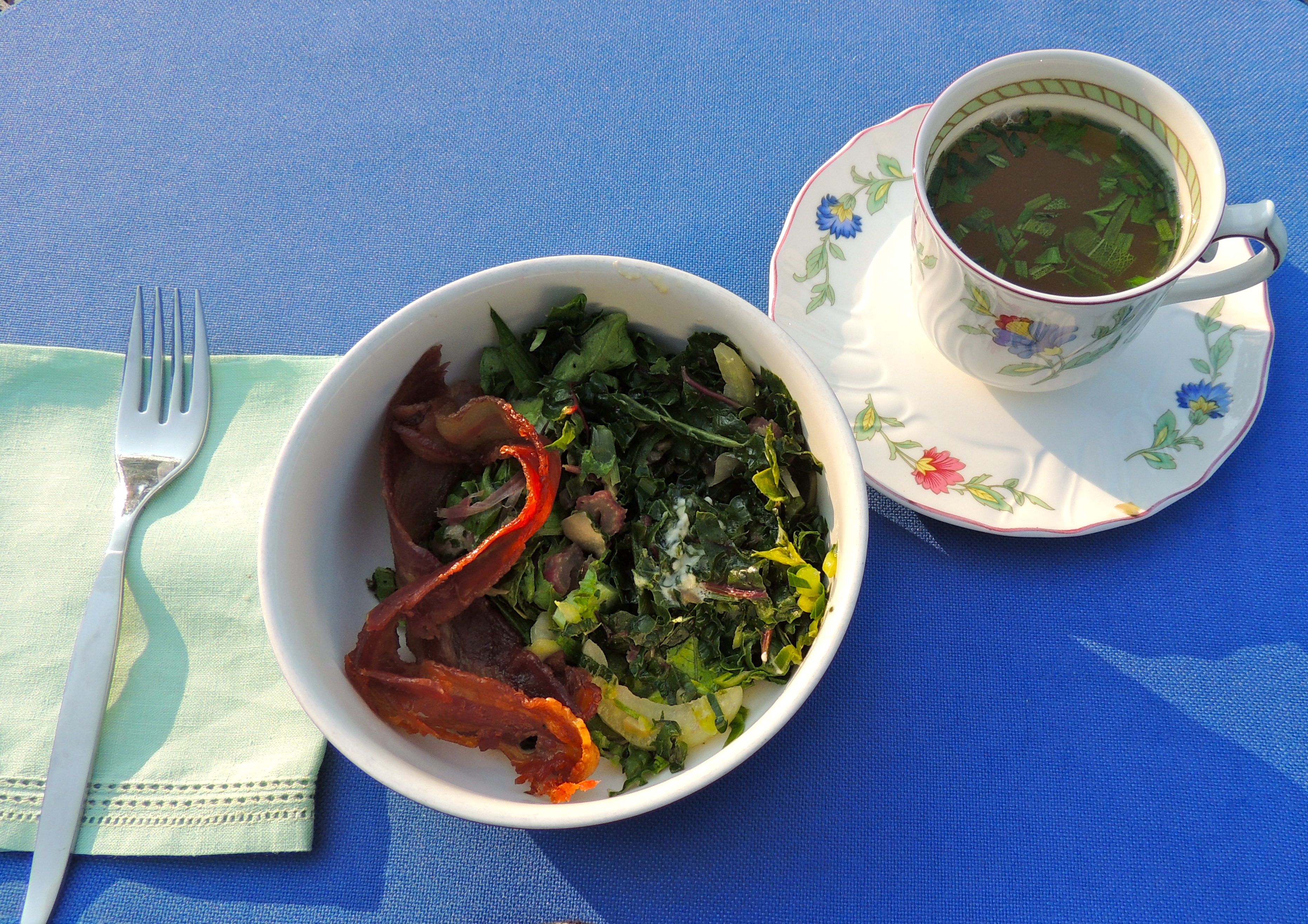 Boxed Broth: Not the real thing...at all

Homemade broth, or stock as it is commonly known, has been a quintessential part of traditional cuisine for centuries, withstanding the diversity of environment, cultures and time by it’s unique healing composition. However, while many societies continue to make broth by traditionally slow-cooking bones, Americans have become entranced by the flash made, MSG-infiltrated boxes of broth alternatives found at the store. These invasive broth impostors came about in the 1950’s when people discovered that meat flavors could be laboratory-mimicked and added to inexpensive grain and legume proteins with palatable effect. While profitable to the food industry, these synthetic products rob consumers of the rich organic flavor of homemade broth, the respectful tradition from which it was derived, and the deeply nourishing benefits it has to offer. Boxed or canned broths (even if organic) are not fresh. They are diluted and skimmed, yielding far fewer nutrients and no beneficial gelatin. They also contain sugars, GMOs and additives not mentioned on the FDA regulated label. In our hectic lives, it all too tempting pass by the idea of homemade broth in the name of time, however learning how to make broth is not as complicated or cumbersomely involved as one might think- and quite probably one of the best things you can do for your well being. All it takes is a bit of experimentation and once you awaken from the trance of processed broth with a spoonful of your homemade golden, aromatic liquid, you will never go back.

Homemade Broth: Why so healing?

Bone broth quite simply, is made from slowly cooking bones, some pieces of meat, vegetables and pure water together for extended periods of time. This practice was traditionally part of the respectful and sustainable process of using all parts of locally slaughtered animals for sustenance, without wasting anything. While we are now accustomed to seeing skinless, boneless, lean chicken wrapped up neatly in styrofoam packs at the store, bones are actually a nutritionally valuable part of the animal when used to make a broth. Homemade broth offers minerals in a form that the body can easily absorb, including calcium, magnesium, phosphorous, sulphur and trace minerals. Broken-down components from the animal cartilage and tendons such as chondroitin sulphates and glucosamine are also transfered into the broth, which are now sold pharmaceutically as expensive supplements for arthritis and joint pain.

Perhaps one of the most crucial components of homemade broth is the gelatin- the substance that causes a good stock to congeal when cooled. Gelatin has been used to heal and nourish people for thousands of years, with documented use dating back to the Chinese culture in 204 A.D. It is difficult to replicate, and something that you will simply never find it in a can or a box of broth (though sometimes they try to add emulsifiers and thickeners as a quick fix). Gelatin is a unique food in that it has hydrophillic colloid properties, meaning that it attracts water and gastric juices to greatly ease the digestive process. Though it does not contain complex full proteins, gelatin contains 20 important building block amino acids and acts as a protein sparer, to maximize use of ingested of protein sources. Glycine is an important amino acid contained in gelatin. As the simplest amino acid, scientists have found its role in body function to be quite complex, including involvement in glucogenesis and detoxification. Glycine is involved in the creation of hemoglobin, creatine, bile salts, glutathione, other amino acids and the nucleotides RNA and DNA. Though this amino acid is not technically considered “essential” (meaning the body can produce them in limited amounts without dietary intake), many experts suggest that the 21st century diet is not sufficient in supplying the body support the creation of glycine independently, and thus ensuring adequate food sources is recommended. Carefully and correctly made bovine gelatin from grassfed cows can be added independently to other foods as a digestive aid and supplemental thickener as well.

Make Your Own Bone Broth

With the benefits of broth being so wide-reaching, it is nonsensical to corner it as a seasonal food reserved for soups and stews in the colder months! Follow this recipe as adapted from The Naked Foods Coookbook at any month of the year and you will have glorious stock to add to other dishes, or to enjoy on a cooler evening. The stock will keep in the refrigerator in a glass container for about five days, or for several months in the freezer, so large batches are useful for extended periods of time. It can be helpful to separate into quart or pint containers before freezing- this way you will have it in appropriate amounts to make a soup as needed. While this recipe is for beef bone broth, Nourishing Traditions offers a wide array of recipes for chicken (pictured above), turkey, duck and fish stock. For a fantastic video reference, see Soups and Stocks by Weston A Price Chapter leader Sarah Pope, The Healthy Home Economist.

1/2 bunch fresh parsley (stems and all)

Add all ingredients except for parsley, bay leaves and peppercorns into a heavy-bottomed 8-quart pot with 14 cups filtered water. Cover and bring to a boil. A significant amount of scum will come to the top, remove with a spoon. After skimming, reduce heat and add bay leaves and peppercorns. Let simmer for at least 12 and up to 72 hours. Just before finishing, add parsley and simmer for an additional 10 minutes.

Once simmer is completed, remove bones with tongs and strain the stock into a large bowl. Let cool in the refrigerator and remove the congealed fat that rises to the top. Use immediately or store as appropriate.

*If also using meaty neck and rib bones, place in roasting pan and brown at 350 degrees in the oven before adding to pot with other ingredients. Once the meaty bones have been added to the stock pot, pour fat out of the roasting pan, add cold water to the pan and set over a high flame to bring to boil. Stir with a wooden spoon to loosen up coagulated juices and add this additional liquid to the pot.

Broth is Beautiful by Sally Fallon