Who can resist the innocent delight of garden fresh fruits and vegetables? Served raw with satisfactory crunch or sauteed piping-hot with butter, produce is a treasured cornerstone of a nutrient-dense diet. However, the problem today is that most crops are not as "fresh" or "healthy" as we may think. While major growers claim that produce is 98% pesticide residue-free, analytical contamination studies suggest dramatically otherwise. In the midst of an era of convoluted marketing and misinformation, making healthy diet choices can be a head-spinningly complex task...even when it comes to something so simple and honest as veggies. For this week's recipe blog, we put together a formula of things to look out for when gathering produce for your cooking, keeping both health and budget in mind. Next time you find yourself lingering in the produce aisle, gripping the cart and calculating differences in expensive organics or their cheaper conventionally grown alternatives, you'll have some important guidelines that may make choices a bit easier.

“Pesticides are toxins, and they can’t be good for us. So, the only question is: how bad are they? I think in many cases the answer is pretty bad. A lot of these chemicals are toxic to the nervous system, others may disrupt endocrine function in the body, or they may increase risk to cancer and other chronic disease. We should all be taking action to minimize our exposure to pesticides...” 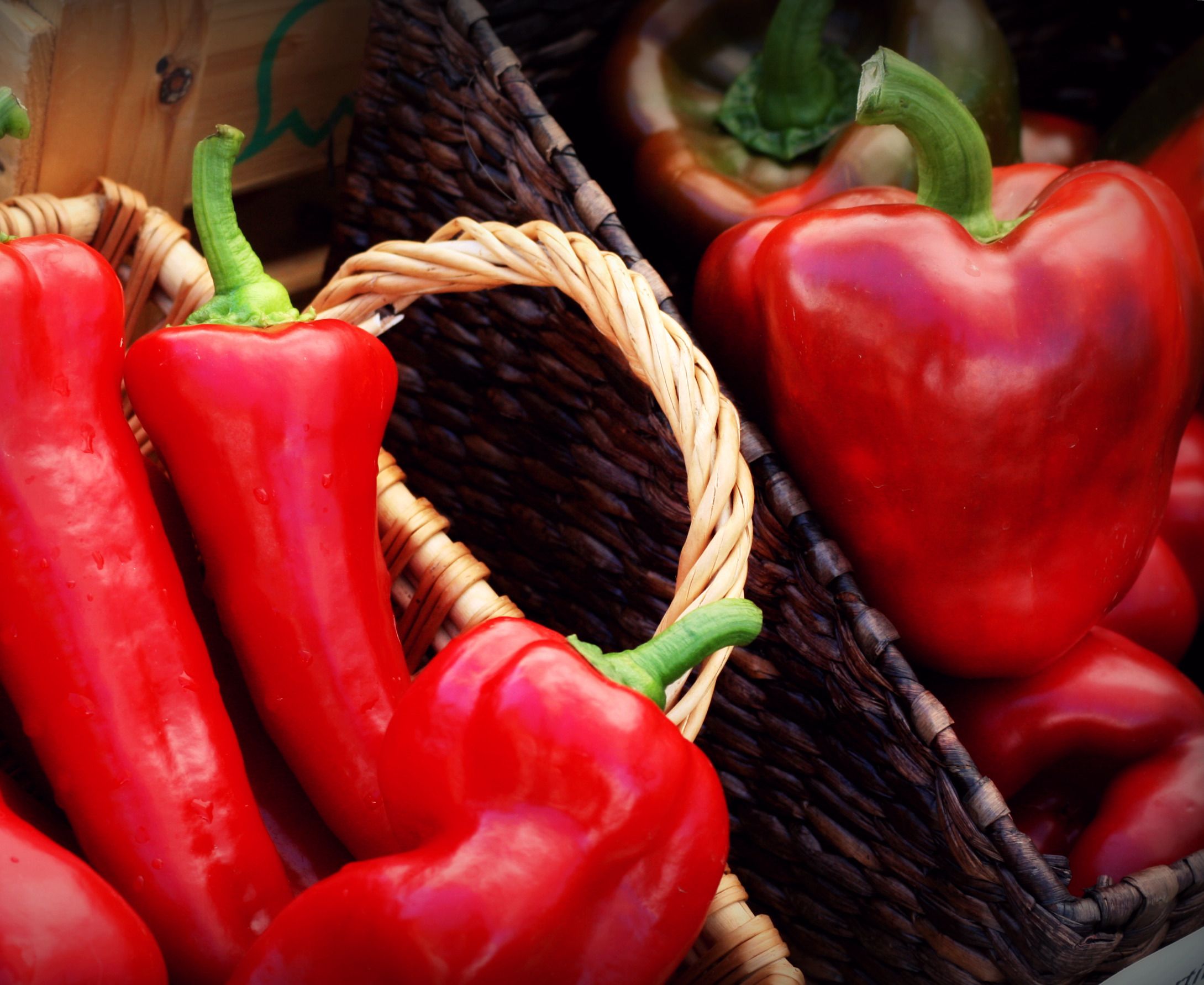 While the FDA states that consumers can remove pesticide residues from foods by “removing outer layers and washing the food in cold running water,” this is certainly not always the case. It is often true that the highest concentration of pesticides tends to be on the outer layer of a food, but coincidentally this area is generally desirable for it's high nutrient density, and besides, nobody wants to spend hours peeling the skin off of every individual grape before munching on them. Additionally, due to the intensity of pesticide spraying and treatment techniques, produce items also grow to have pesticides within them. This brutal cycle begins with harsh seed treatment programs, wherein fragile seeds are soaked in nasty pesticides even prior to planting. Thus, despite your most enthusiastic efforts at scrubbing a treated apple before eating it, damaging pesticides simply will never be eliminated this way. As Robert Wiles, senior vice president for the Environmental Working Group Says, “You should do what you can do, but the idea you are going to wash pesticides off is a fantasy.”

The other issue with washing vegetables is the amount of run-off pesticides that have made their way into the water itself. In 2010, the USDA did a study of 12 communities that use standing water (reservoirs, rivers and lakes) as a basis for their water supply. Post-treatment, 65% of the collected samples from these supplies contained pesticides or their metabolites. Among these chemicals were herbicides atrazine, 2,4-D and metolachlor. Startling to say the least, this information brings to light the importance of drinking water purification. While various types of water systems like the 14-stage biocompatible, whole house or countertop systems are vitally helpful in limiting pesticide exposure, this fact also brings to light the importance of supporting the art of organic farming to address the root of such concerning pesticide contamination issues.

Produce Today: Pretty looking, not so good for you

Another issue with non-organic produce is that it is significantly less nutritive. In 2004, the Journal of American College of Nutrition found that the nutrient content of crops since the 1950’s has declined as much as 40%. This is largely due to the fact that modern agricultural practices focus on creating high yield, pest-resistant and appealing-looking crops, without regard to the preservation of balanced natural vitamin and mineral composition. The result of these manipulative farming techniques? Unfortunately chemical-infused, genetically modified, carbohydrate-bulked produce specimens and depleted soils. Not only does the spraying of pesticides and concurrent non-rotation of crops alter the produce itself, but it irreversibly damages the ecosystem by extinguishing all of the vital vitamin-fixing bacteria and earthworms from the soil. Because most minerals are absorbed through the soil into vegetables and fruits, infertile and contaminated land is a major contributor to the the rampant issue of magnesium deficiency today. This is why many experts are now claiming that magnesium supplementation has become a necessity for health in our modern environment. In the midst of this calamitous situation, optimistic studies have shown that resilient and organic crops, which are grown using more traditional methods (such as crop rotation and natural seed sowing), have in fact maintained a significantly more robust nutrient profile. Inspiring in nature, these studies demonstrate that a unified concern with the trends in modern crop growing must be cultivated in order to prevent the destruction of resources and to protect the integrity of the beautiful earth.

Some Clarity: The Clean Fifteen and Dirty Dozen Plus

It seems like simple logic: we would should solely eat certified organic to reduce our personal pesticide exposure and also to support environmentally sustainable farming practices.  However, the reality is that in an unsteady consumer market it can be difficult to buy all-certified organic, especially as food prices continue their incessant climb and organic options can be limited in availability.

Realizing the paradoxical circumstances of organic food buying and frustrated with what seemed like skewed safety statistics from the USDA, a group of researchers, policymakers and scientists collectively called The Environmental Working Group (or EWG), took pesticide research into their own hands. Their large scale project involved a six part contamination analysis of more than 60,700 fruit and vegetable samples, collected between the years 2000-2010. The EWG was shocked at what they found: at least 63% of their samples were contaminated with pesticides. Yet, while some fruits and vegetables showed shockingly high amounts of residue, others did not. By further analysis they concluded that simply by purchasing certain types of organic produce, one could reduce the amount of toxins consumed on a daily basis by upwards of 80%. To bring this important message public, the organization compiled a shopper’s guide called “The Clean Fifteen and Dirty Dozen Plus.” This list details produce items that tend to be highest in pesticides, which should always be bought organic or otherwise avoided, and also those that tend to be less contaminated and can be bought conventionally if needed. Thus, if you or others that you know, are struggling to make the sometimes tricky switch over to organic, this may be just the bit of information to help along the way. 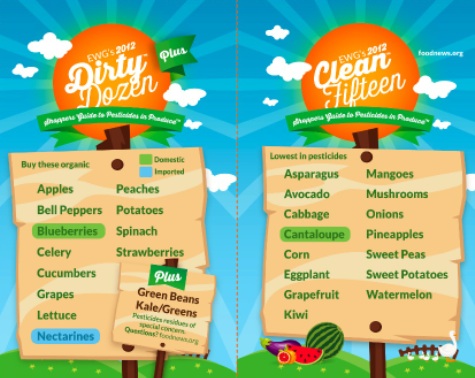 There is a large variance in the amount of pesticides found in produce based on how easily the crops grow, the development patterns of the plants, and where they come from. The fruits and vegetables on the "Dirty Dozen Plus" list tested positive for at least 47 different chemicals in collected samples (and upwards of a whopping 67 toxins). These items should most definitely be purchased organic, or unfortunately, avoided altogether. Green beans, kale and greens were added to this list in 2012 due to their high content of neurotoxic organophosphate insecticides. These dangerous chemicals have recently been restricted from agricultural use, however policies continue to allow certain types of crops to receive treatment. Thus while the items in the “plus” category may not meet the requirements for numbers, the types of pesticides are a cause for major concern. In order to be included on the “Clean Fifteen” List, produce had to have little or no amount of pesticide residue in all collected samples. Of the Clean Fifteen vegetables, no single sample had more than 5 different chemicals. Though of course supporting organic efforts is the goal, these items can be purchased from conventional growers with significantly less contamination. Next time you are looking around at products, keep these facts in mind so that you can make informed choices for you and your family. Knowledge is empowering, and it couldn't be more important that products you use frequently are organic and excipient free as often as possible!

The EWG's 2012 Shopping Guide to Pesticides in Produce