We rarely go a day without seeing them- stuffed into car cupholders, slung into messy gym bags and placed neatly at the edge of office desks. With sodas slowly following out of the spotlight, flavored bottled water is everywhere- finding its way into all parts of the consumer’s day. Now, with clever multimillion dollar marketing initiatives bursting into a colorful array of fancy enhanced waters bulked with “energy boosting” electrolytes and sophisticated flavor combinations touted for their “still natural” appeal, there are more fancy water options available than ever before. Flavored waters are loaded with nasty artificial sweeteners and ineffective synthetic vitamins all of which increase their already soaring price tag while increasing thirst, stimulating appetite and posing some other significant health risks. So, what makes flavored waters so sweet?

A Spoonful of (Fake) Sugar 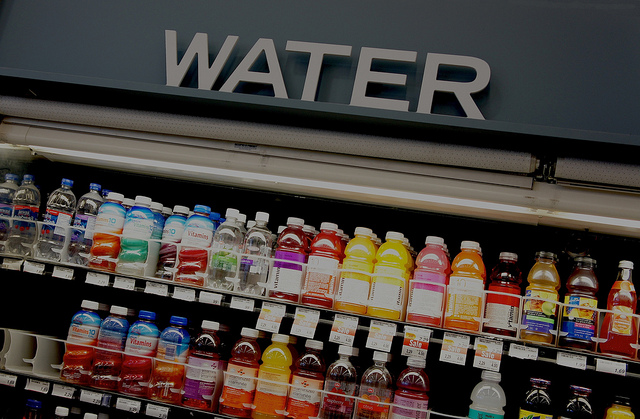 Although most commercial flavored waters don’t list clinical-looking chemical names right on the ingredients label, many are happily marked with cheerfully ambiguous terms like “artificial sweeteners,” “sugar-free,” and “no-calorie.” Nestled between images of succulent fruits, doesn’t this sound appealing? Not when you look closely at the substances hiding under these clever terms:

Saccharin (Sweet and Low)- Made of synthetic ingredients to form a compound of carbon, nitrogen and sulfur atoms, this sweetener passes directly through the body undigested. It has had several controversial bans worldwide, but continues to be on the market today.

Aspartame (Nutrasweet and Equal)- When handling this genetically modified compound, workers must wear protective gear, including goggles, gloves and a mist/dust respirator. Several studies have found it to be neurotoxic with prolonged exposure and/or consumption.

Sucralose (Splenda)- Processed in a single high security lab in Alabama, this sweetener  uses chlorine and phosgene gas to create a chemical that is foreign to the body, and thus cannot be digested.

Sugar Alcohols (Mannitol, Sorbitol, Lacticol and Xylitol)- Most commonly found in sugar free gums, these products act as laxatives in large quantities. They often cause bloating, gas and diarrhea in addition to disrupting innate bowel flora while exacerbating yeast issues.

Artificial sweeteners have long been under scrutiny for their harsh chemical make-up and synthetic formulation. In fact, eerily enough, all artificial sweeteners currently on the market were discovered entirely by accident as a result of laboratory mishaps. Saccharin (Sweet and Low) was developed by two Johns Hopkins Univeristy chemists 130 years ago while they were experimenting with coal-tar derivatives. Sucralose, (know most popularly as Splenda) was discovered by a grad student at King’s College in London, whose lead researcher told him to “test” some compounds and he misunderstandingly “tasted” them instead. It seems unbelievably absurd and humorous, yet hearty curls of laughter come with a looming hesitation: could this really be what’s in our food and drink today?

Mmmmm, Hand Me a Bottle of Berry Flavored Chemicals!

The Food and Drug Administration has standards (albeit questionable in integrity) for spring, purified, mineral, sparkling, artesian and well waters. However all other waters, such as those containing added flavoring, vitamins or other enhancements, are viewed as soft drinks. Thus standards around purity and chemical additives for flavored waters are far more lax than the sketchy standards for plain bottled waters. Despite several studies linking various sugar alternatives to headaches, liver and kidney enlargement, cancer, anxiety and gastric distress, the FDA gently allays any suspicions that the artificial sweeteners used in flavored waters are dangerous, stating they are a “GRAS” food additive: generally recognized as safe in “small amounts.” While some healthcare professionals suggest "non-nutritve" flavored waters as a "healthy way" to approach weight loss, evidence has actually shown them to cause weight gain by increasing cravings and cultivating metabolic confusion. In a climate of diverse perspectives and skewed evidence, avoiding artificial sweeteners and bottled beverages altogether is the most wholesome and beneficial choice. After all, it seems like common sense not to drink chemicals that are created in a process similar to that used to make pesticides. Next time you are looking for something tasty and hydrating to quench your thirst on the go, stick to pure drinking water in a glass water bottle instead. To learn more about getting pure remineralized water in your home, see what Radiant Life's water experts have to say.

The Chemistry of...Artificial Sweeteners by Jocelyn Selim of Discovery Magazine

Everybody In the Water by Susan Yara of Forbes

Image: "Water? Are you sure about that?" By Andrew Forgrave/Courtesy Flickr