Harvested from the earth and sea, salt has long been used to flavor and preserve foods, as a commodity for trade, in the creation of healing remedies and symbolically in religious ceremonies. Today however, we almost exclusively think of salt packed neatly into a shaker on the table- finely ground and handy to sprinkle atop fries or dash into decadent baked treats for a little punch. It is a substance that is now discussed with an air of controversy, some demonizing salt for its supposed contributions to poor heart health and others eagerly scooping it onto their foods and gobbling it up for added mineral content. With fine collections of shimmering "gourmet" salts filling up the market, from a wide variety of origins and in all sorts of intriguing color combinations, it can be overwhelming to decipher good from bad. Are these fancy salts worth it? And how can you tell which are healthy to use?

A Brief History of Salt

For a seemingly simple compound, salt has a deep and significant history across human civilization. It is believed that people first discovered salt by following the paths worn by wild animals on their perpetual treks towards salt licks, and consequently built settlements nearby. The expansion of the practice of salt harvesting is thought to be inextricably linked with the growth of agriculture, as humans swapped their naturally salt-rich game for vegetables, grains and legumes. The earliest known writings about the subject are from about 5,000 years ago of Chinese origin, with the Egyptians recording pictures of a process for salt production dating back about 3,500 years. Many great thinkers of the ancient world also expounded its importance- Homer calling salt a divine substance and Plato describing it as especially near to the gods. Hippocrates, in a very systematic and functional way, even recognized salt remedies to be useful in healing infections, clearing congestion and curing disease. Over the years, with its colorful cross-cultural history, many tales and legends have accumulated about this coveted crystalline mineral- from the Roman goddess Salus (derived from “sal,” the Latin word for salt) bringing health and prosperity to all, to the superstition that enclosing oneself in a ring of salt will offer protection from vampires (1,2). Yet in the modern day, despite its glowing historical reviews, we have been warned to limit salt intake because of its link with poor health outcomes, such as high blood pressure and heart disease. Call it cliché, but one of the primary reasons for these warnings is that salt today is quite simply not what it used to be.

In order to sort through all of the wrangling about dietary salt, it is first important to get an idea of where salt comes from. It sounds like a basic concept- but how often do you pinch salt onto your food without giving the precious stuff a second thought? Traditional salts are prepared in careful age-old methods that are specific to the region from which they are harvested. Brine (a mix of salt and water) is generally hand-collected from the sea or clay-lined salt ponds then laid out in salt “pans” to evaporate by the forces of the sun and wind. Alternatively, salts are mined from deep deposits in the earth, via shafts that extend up to one half mile down. By nature, unrefined salts tend to be quite nutrient rich, bolstering about 80 different trace minerals in a way that is ideally balanced for use in the body. Each type of salt carries a unique character that is influenced by the ecology of the region from which it is derived. For example, in some areas the seasonal pollen from nearby mountains gives sea salt a distinctive quality at different times of the year- however given modern food standards, such variations are generally rinsed away from the product prior to its leaving the community.

Unlike the raw salts used ancestrally, conventional table salt is a sad, processed, nutrient-devoid, sterilized product. While the salts typically used in modern cuisine still originate from natural sources, they are often gathered under the roar of diesel-fueled machines and then bathed with chemicals such as sulfuric acid and chlorine to remove so-called “impurities,” stripping the beneficial minerals right along with them. The brine is then evaporated under high compression heat, and further dried in a fluidized-bed-dryer to remove any remaining moisture, meanwhile causing damage to the very molecular structure. During packaging any number of anti-caking, free flowing or conditioning agents are added into the mix. These chemicals, including sodium ferrocyanide, ammonium citrate and aluminum silicate, are allowed to stay in the final product at volumes of up to 2% as per industry standards.

So why all of this tedious work of refining if all it seems to do is waste chemicals and take away nutrient content? For starters these procedures take out the moisture and other organic matter giving salt a shelf life of, well, forever and also allowing the stripped minerals to be sold separately for use in industry. If salts are taken from a polluted area, these operations do remove some amount of environmental toxins (albeit adding others in the process), and aesthetically, the resulting all-white bleached salt is thought to be more appealing to the consumer because of its “cleaner” appearance. The additional ingredients in the salt prevent it from clumping, and allow for a silky smooth pour from shakers. Most salt is also iodized, meaning that supplemental iodine has been added. While an important nutrient, iodine is not naturally occurring in salt, but is rather added as a public health initiative to promote thyroid health. However, even though this effort is seemingly well intentioned the amounts of added iodine are nominal, making organic food-based sources of this nutrient far superior in replenishing stores (3).

What Kinds Of Salt Are Best?

Luckily, quality sources of unrefined salt can still be found today- it just takes a bit of special care and diligence to locate them. With the high rate of pollution in ocean waters and the leaching of toxins into the ground, it is important to find salt from a trusted source, that has been cultivated from a relatively clean environment using sound methods. Look for salts that have been carefully inspected for mineral content, taste, texture, smell, color, crystal integrity and the presence of heavy metals. Using a grinder for coarse grain salts is optimal if you are unsure of the manufacturer's practices, as this will minimize risk of the presence of anti-clumping additives. Also be wary that as companies catch on to the natural health trend, many are labeling their products as "all natural" or "pure"- terms that sounds oh-so-healthy, but are largely insignificant as many of these products are still refined.  In general look for terms like "hand harvested," "unrefined," "sun-dried," and "additive-free." 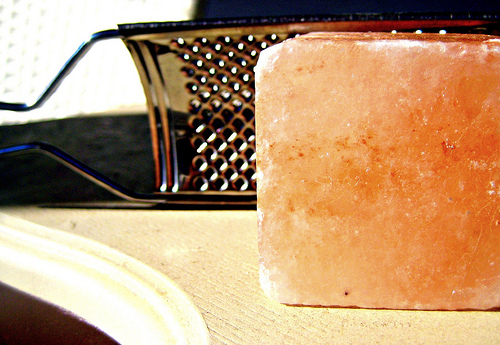 As far as what salts are "best", evidence is quite complex, conflicting and inconclusive, with each location boasting health benefits over the other. While some people argue that there is no such thing as decent sea salt any more due to contaminated waters, there is little actual evidence to support this claim (4). In my experience and research, crystal salts from the pristine coasts of Central America have been a largely trusted source, as have carefully selected Grey Celtic Sea Salts from the clay-lined salt beds of France (5). Himalayan Salts are also valued for the higher iron content which grants them a pinkish tone, and are often extracted from protected mountain stores. Sacred black salts from the Hawaiian Islands and rose crystals from the Andes of Peru are reputable as well, as are those harvested from the ancient ocean beds of Utah. There are certain locations from which salt should not be consumed due to known toxicity, such as from the Dead Sea because of high levels of bromide in the waters (6). Each salt choice offers a distinctive flavor and strength, making some more beneficial for cooking while others are best used for finishing. It is important to use a variety that is appealing to your tastes. Remember that in the Standard American Diet about 75% of total daily salt intake comes from processed foods, which almost invariably use inexpensive and convenient refined salt (7). So, it is important not only to think about what kind of salt you have in the house, but also where else you may be getting it from.