We love technology. From making calls on our beeping, buzzing cell phones to clicking around in the dream-world of Facebook, many of us are addicted to the glitz and glow of screens. The digital world is captivating and steadily growing. Advances in technology over the past 15 years have completely transformed social patterns, altered the ways we teach and learn, expanded communication channels and created major shifts in business practices (and yes, the irony of typing this paragraph into an internet article is not lost on me). But the very mobile tools that we have come to treasure and depend on may actually be silently devastating our health. Studies indicate the the ambient electromagnetic fields generated by appliances, broadcasting networks and cellular devices could actually be quite problematic for the body and mind. 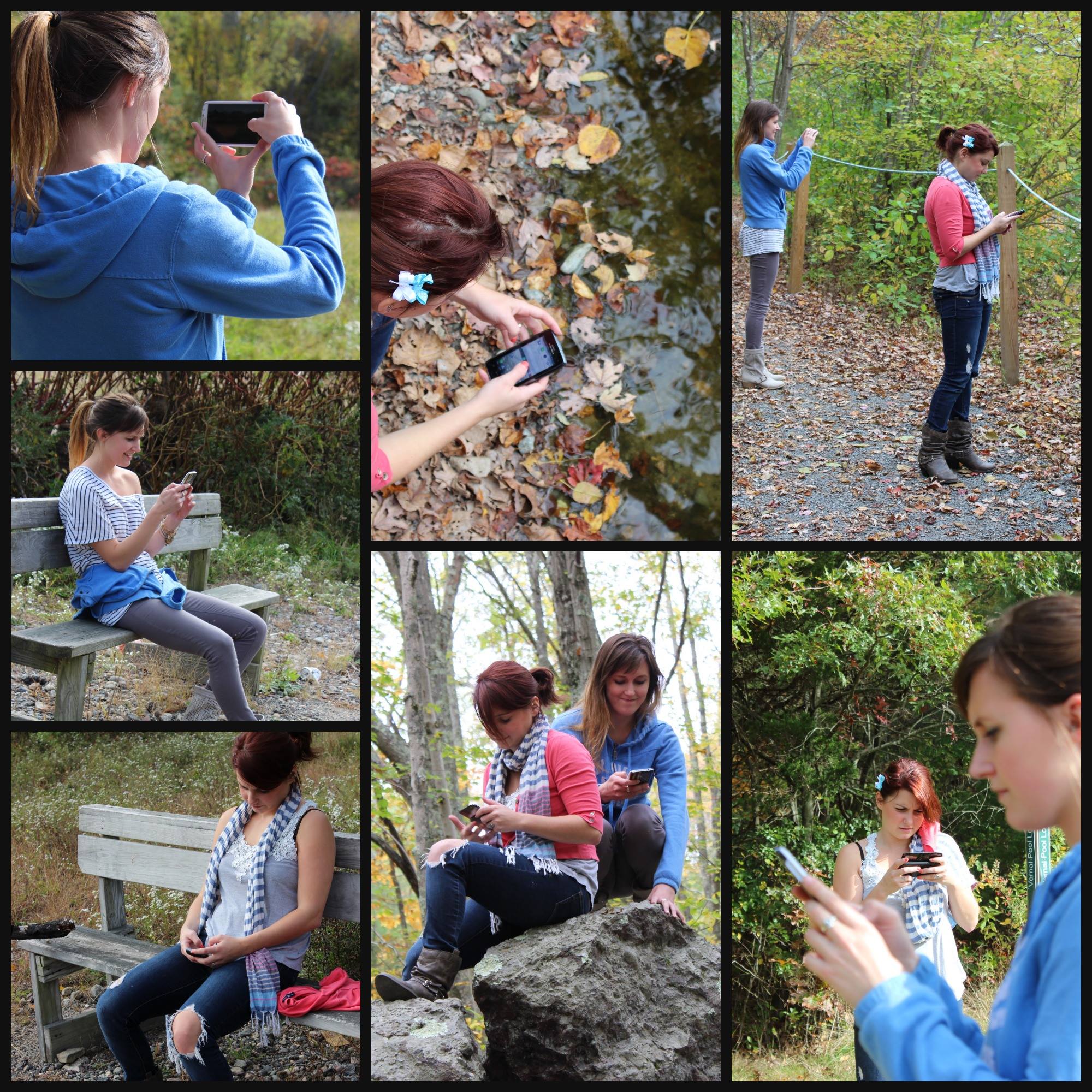 EMF stands for electromagnetic field- a fancy term used to describe the invisible areas of energy associated with the use of electrical power and forms of natural and man-made lighting. Electric and magnetic fields fall on a broad spectrum of electromagnetic radiation that spans from the stable pull of a handheld magnet to beams of visible light; radio frequencies to infrared and X-rays.

Electric fields occur when positive or negative electrical charges are present and apply forces on other charges within the fields. The fields and their strength are measured in volts per meter (V/m). Active electrical wires produce electric fields, as do almost all electric powered devices. The field exists even when there is no current flowing. When the voltage increases, so does electric field surrounding the device. When moving away from the source of the field, the field strength is reduced.

Magnetic fields are created from electric charges. Their strength is measured in amperes per meter (A/m). Electromagnetic Fields (EMFs) also have related measurements which identify the flux density, expressed in microtesla, µT. When current is increased, the strength of the magnetic field increases. Magnetic fields are not commonly blocked with everyday materials.

2. Where do EMFs come from?

Electric and magnetic energy exists everywhere. The earth is a natural source of powerful positive and negative electrical charges that apply forces on one another. The majestic show of a thunderstorm for example, causes a turbulent build-up of electrical charge in the atmosphere. A higher voltage of electricity brings about a stronger electric field. The earth’s magnetic fields are also powerful, serving as a guiding force for the intricate annual migration patterns of fish and birds and bringing the needle on a compass to orient North. Magnetic fields are created from electrical charges that have a current or a flow moving through them. These currents are measured in flux intensity and density, making waves that can easily permeate everyday materials. In addition to organic sources, electromagnetic energy is created from the industrial whizz and whir of man-made power sources including power lines, electrical transformers, machines, appliances, broadcasting technologies and mobile devices.

3. How are EMFs Classified?

EMFs are generally characterized based on their wavelength and frequency. To understand these classifications, it is important to know a few things about how EMFs travel through space. Energy in the electromagnetic spectrum occurs in a series of waves- similar to the rhythmic rise and fall observed in ocean tides. Frequency describes the number of oscillations or cycles that occur in a second, whereas wavelength details the time between waves. Wavelength and frequency are thus very closely linked and inversely related: the shorter the wavelength the higher the frequency. 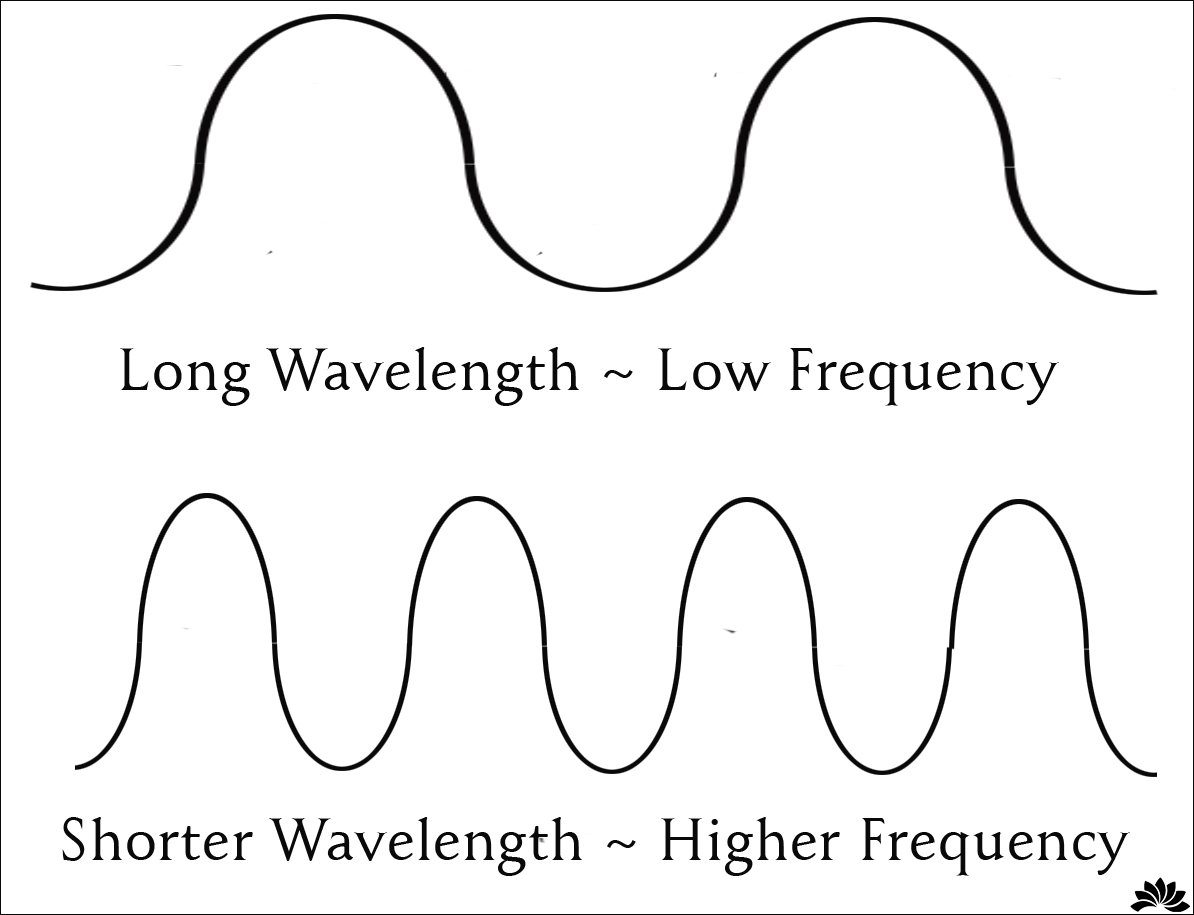 Based on the wavelength and frequency, different types of EMFs possess specific qualities that provoke unique reactions by the human body. Ultimately, the higher the frequency the more energy and potential for damage an electromagnetic wave carries with it. When very strong, the electromagnetic fields can convey sufficient energy to break bonds between molecules. This is known as ionizing radiation and includes the gamma rays emitted by radioactive materials, cosmic rays, and X-rays. Those fields whose energy (also known as quantum) are insufficient to break molecular bonds are referred to as ‘non-ionizing radiation.’ The chart below describes some common EMF sources and where they fall on the electromagnetic spectrum. 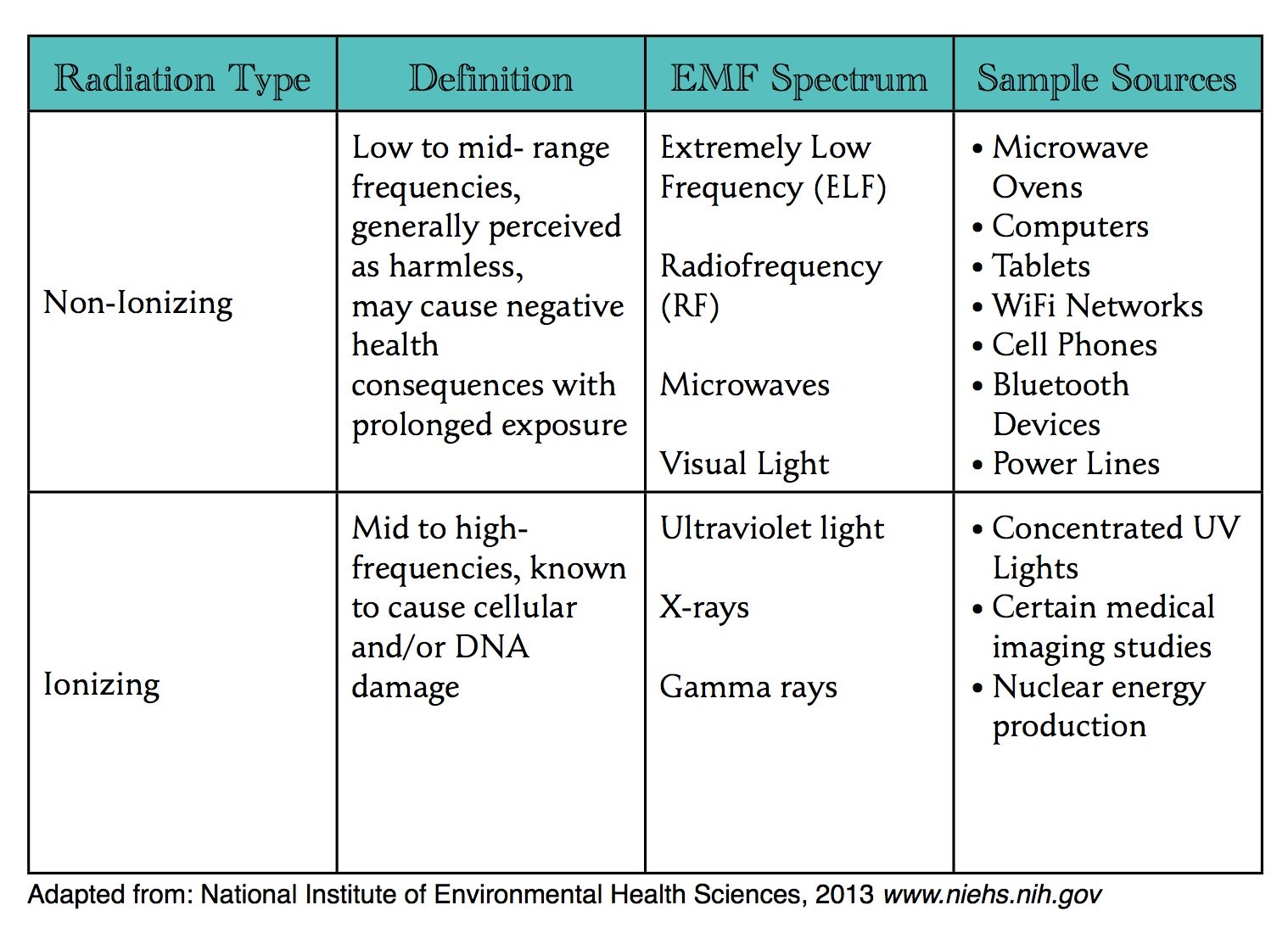 4. Are EMFs dangerous to human health?

We know very well that powerful ionizing radiation is hazardous to human health. UV, Gamma and X-rays have all been shown to carry enough energy to instantly create cellular and DNA damage in the body, however varying information exists about the dangers of lower-level EMF exposure. Some write the EMF debate off as hippie mumbo-jumbo, while others are legitimately afraid of accumulating radiation toxicity. Researchers seem split on long-term EMF safety, and the polarizing issue has left most lay people unsettled and admittedly confused.

The steady increase in electricity demand, domestic appliances, industrial tools, broadcasting, and mobile technologies used today has raised serious concerns about the cumulative effects of EMFs by consumers and researchers alike. Over the past 30 years, over 25,000 articles have been published on the subject, each with complicated and often contradicting results. Many studies have linked lower-level EMF exposure to such concerning conditions as infertility, DNA fragmentation, dermatological irritation and cancer, yet no intelligible manufacturing or usage guidelines have been released. Muddled by the biases of private interests and overall newness of such technologies, study findings have been allegedly ‘too inconsistent’ for policy-makers to take progressive actions. Guiding institutions such as the World Health Organization (WHO) have stalled on taking a clear public stance on the matter, as some of their literature boasts about the safety of mobile technologies, while other evidence-based documents list cell phone use as a “Class B” carcinogen next to lead and engine exhaust.

Left with these ambiguities, it has become up to the consumer to gather independent research and devise personal opinions on EMF sensitivity. Due to the lack of long-term studies, even the most comprehensive scientific reviews admit to gaps in the current knowledge base around EMF exposure. Yet amidst all the squabbling, one thing has emerged as unfailingly clear: chronic exposure to EMFs has not been proven universally safe.

Electronic Hypersensitivity (EHS) is a clinically recognized and documented cluster of nonspecific symptoms that have been linked to more short-term EMF exposure. Medical professionals believe that certain individuals are more vulnerable to the charges and currents produced by EMFs, similar to the ways in which some people struggle with food sensitvities while others do not. Sympotms of EHS include (but are not limited to):

5. How can I protect myself from EMF exposure?

It is impossible, and truthfully undesirable, to eradicate EMFs from the environment, however a few simple techniques can minimize the risks associated with chronic exposure. We do not have to be lonesome victims of EMFs nor banish technology forever, but can instead be empowered to work safely with the knowledge and tools we currently have available. As research progresses in the coming years, we will hopefully continue to expand our understanding of EMFs so that we can all enjoy the benefits of technology in a way that is safe and beneficial.

If you are concerned about the potential of EMFs being emitted by a powerline or substation near your residence or office, your local power company can be contacted to schedule an on-site reading. Low-level EMFs are detected in the air using tools that measure Gauss- a unit describing magnetic flux density and intensity. You can also measure EMFs personally by using a handheld gaussmeter, which can be found for purchase online.

The intensity of electromagnetic energy decreases with space from the source. In the case of laptop computers for example, a distance of just one foot has been shown to decrease EMF strength by 80%; two feet by 90% and four feet by a total of 98% neutralization. Keep cell phones out of your pockets and never put a laptop or tablet directly onto your lap.

Most of the concerns about EMFs have to do with cumulative, long-term effects. By minimizing the number of hours spent gazing into the glow of the computer or tapping away at the tablet or cell phone, you can protect your body from the collective damage of electrical currents. This also involves creating an electrically “clean” environment for the hours that you spend soundly sleeping. Consider relocating your bed away from walls shared with appliances, and keep cell phones, laptops, tablets and other devices out of the room or completely powered off.

Immersed in our modern world of e-communication and advanced technology, it isn't always realistic to stop or limit the use of electrical devices. In such cases using a physical shield, such as this one by DefenderPad, can be helpful in deflecting EMFs from reaching the body. Not all of the shielding products available on the market are reliable or effective, so be sure to do your research and select a brand that has been independently tested to block the full electromagnetic spectrum.