How to Use Emu Oil & Its Benefits: Aboriginal Superfood - Radiant Life

Name a superfood that is rich in omega fatty acids with an impressive amount of natural antioxidants, fat soluble vitamins D and E, and X-factor vitamin K2. Did you guess emu oil? Although not frequently discussed in popular health literature, this somewhat obscure-sounding traditional fat from Australia is actually a powerful and well-established functional food. Filled with synergistic nutrients and healthy fats, a pure and sustainable emu oil is the perfect adjunct to our far-too-often deficient modern diets, and it is incredibly good for the skin too! It's time to give this unique superfood some of the attention it deserves. Learn how to use emu oil and its benefits. 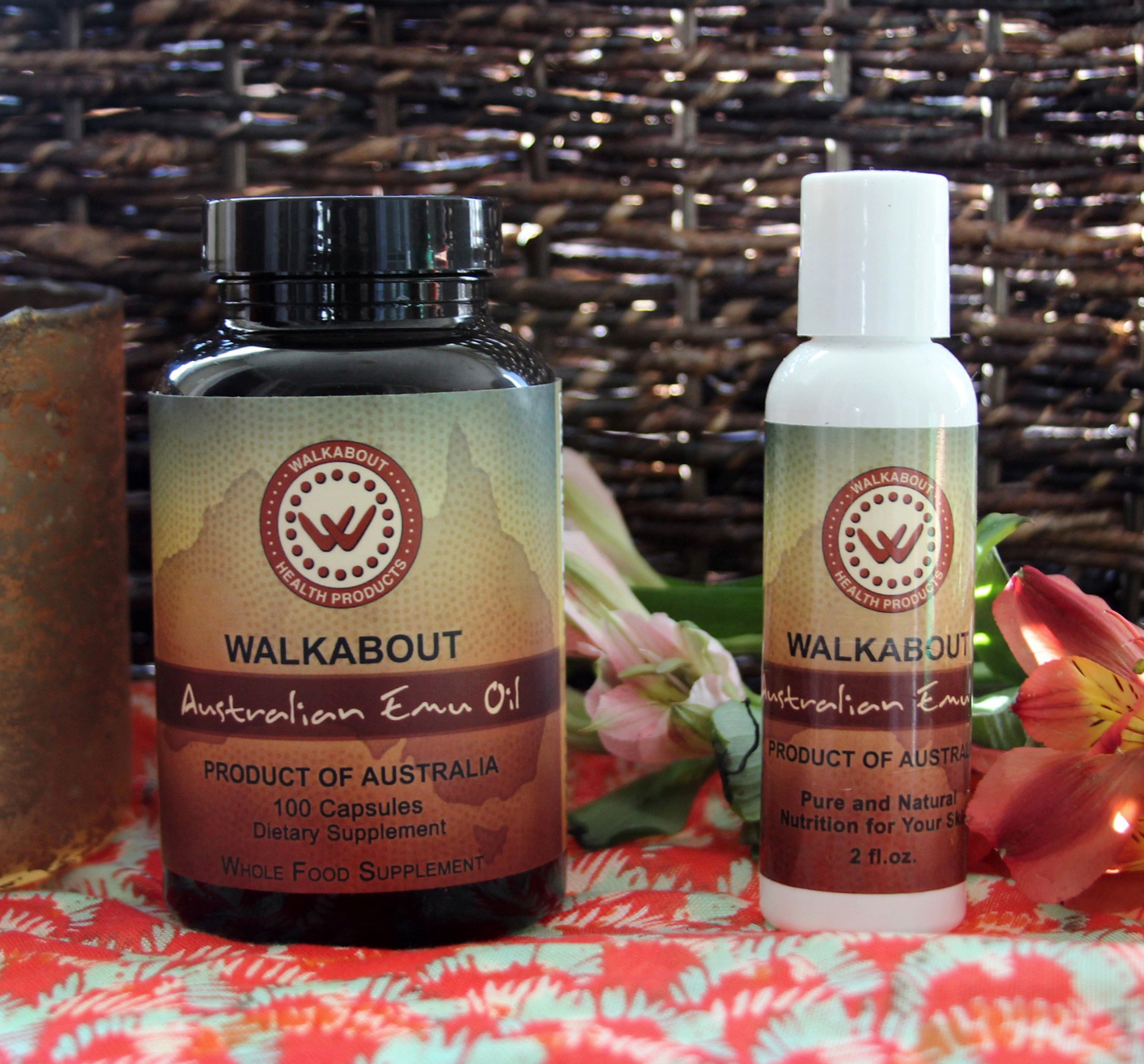 What is emu oil?

Emu oil is a traditional animal fat derived from the Dromaius novaehollandiae- a large, flightless, and rather funny-looking bird native to the vast, arid lands of Australia. Emus are remarkable not only for their astonishing height (they are the second largest bird in the world after their gangly relative, the ostrich), but also for their unique avian ability to build fat stores for survival.

This distinctive fat-storing attribute makes the emu a very interesting and resilient bird. Impressively, the emu can live for months without food or water, stay healthy and reproduce all while living in the Australian Outback- one of the most inhospitable places on earth. Seasonally, male emus are able to sit on their nests protecting the cluster of eggs within for an entire 54 days without food or water before the hatching period begins. During this trying time, the birds survive solely on their nutrient-dense fat stores. Emu fat thus has many life-sustaining characteristics, making it a nutritionally valuable resource.

How was it used traditionally?

The significance of the emu runs deep through the vibrant culture of Australia. As the unofficial national bird, the emu appears proudly bearing a shield on the Australian Coat of Arms, is stamped onto the 50 cent coin and rendered on many popular postal stamps. The mythology of indigenous Australians is brimming with clever tales honoring the emu, including one particular creation myth explaining that the sun was made by throwing an emu’s egg into the sky. It is clear from such oral tradition, as well as by more concrete anthropological evidence, that emus have long been a fundamental part of survival throughout the 40,000 years of human history in the region. (1)

Historically, emus were hunted with respect and care by the native Australian people. Only killed out of necessity, nearly every part of the carcass was used for a special purpose. From the consumables like meat and fat, to bones and tendons, which were reserved for making tools, nothing was wasted. The fat from the emu was considered very precious. Once harvested, liquefied and preserved, it functioned as a topical medicine, dietary fat, lubricant, rub to maintain wooden utensils and tools, and as the base for paints used for ceremonial body adornment, among other uses. Passed down through generations by spoken word, these applications were not highly analyzed or scientifically recommended, but rather a simple part of everyday life.

It wasn’t until relatively recently, in 1860, that a scientist formally documented the extensive benefits of emu oil in written form. While collecting information for his work “Gatherings of a naturalist in Australasia,” G. Bennet marveled at the use of emu oil by Aborigines and early white settlers to heal wounds, reduce pain and relieve muscular disorders with great success. (2)

During his own research expeditions in the 1930s, Dr. Weston A Price -- progressive dentist and nutrition expert-- noted similar findings about the healing prowess of emu oil. In his book Nutrition and Physical Degeneration, Dr. Price expounded on the natural and seemingly effortless strength, impressive dental health, high fertility and relatively low rates of chronic disease among Aboriginal people. Through careful scientific analysis he deduced that these qualities were inextricably linked to their nutrient-dense, whole food diet, which was rich in healthy fats and synergistic nutrients. He remarked that the favorite foods of the Aboriginals included the fatty “intestines of marsupials and emus.” (3)

What are the benefits?

Scientific analysis has enabled further insights into the exact nutritional benefits of emu oil and ‘demystified’ the folkloric beliefs behind this sacred superfood. Emu oil is made up of a unique fatty acid blend that is distinct from other common animal- and plant-derived resources. Made up of a dynamic mix of omega-3s, -6s and -9s, emu oil contains significant amounts of oleic acid (42%), as well as conjugated linoleic (or CLA) and palmaitic acids (about 21% each in composition). The golden oil also boasts an impressive amount of fat-soluble activators that work synergistically with the fatty acids to deliver optimal nutrition to cells. These fat soluble vitamins are desirable in a generally deficient modern diet, and include vitamins D3, E and K2 (as MK-4).

Although limited in number, some evidence-based clinical trials have confirmed that emu oil acts therapeutically as a powerful anti-inflammatory. This superfood has been shown to ease gastrointestinal distress, increase the rate of wound healing and treat arthritis and joint point pain even more effectively than comparative olive or fish oils. (4, 5, 6)

Are all emu oils the same?

In reflection of traditional uses, emu oil is commercially available today for medicinal, supplemental and cosmetic purposes. It is important to note however, that not just any emu oil is adequate in these regards. Since the 1980s, insights into the worth of this prized oil have inflated the market and sparked the interest of profit-minded investors and farmers. Similar to what has happened in the poultry industry, emus have been farmed and intentionally interbred to increase meat and oil yield, resulting in tragically nutritionally devoid products. Controversies over the sustainability and health benefits of emu oil, stem from the unfortunate fact that many birds are raised on massive farms in poor conditions. (7)

It is crucial to obtain emu oil from sources that treat the birds with the same regard and respect as did traditional peoples. The most biologically active form of emu oil, filled with K2 and viable omega fatty acids, comes from a specific genotype of emus raised exclusively on Australian soils. Healthy emus are let free to roam in pastures that emulate their natural habitats, and not offered GMO feed, antibiotics, growth hormone, vaccinations, pesticides or chemicals of any kind. Dr. Will and Liz Schlinsog, the pioneers of Walkabout Emu Oil, have spent years researching emu oils and bringing an incredibly pristine and valuable product into the modern marketplace. They write, “[u]sing tradition and science as our guide, our production method preserves our Emu oil’s natural characteristics. It leaves the oil unadulterated, the way nature intended.” You can learn more about their work and products here.

How is emu oil used today?

Emu oil is an ideal superfood to segment deficiencies often found in standard modern diets. As a whole food, it is safe and suitable for everyday consumption. Emu oil can be taken conveniently in capsule form (like these Walkabout Emu Oil Caps) as a way to supplement fatty acids and fat-soluble vitamins, namely vitamin K2 (the same precious activator found in butter oil). As a concentrated source, taking 4 capsules of emu oil gives you about the same amount of desirable K2 as found in almost 1/4 lb of butter, about 3.6 mcg. (8)

Another emu oil benefit is that it is also incredibly nourishing for the skin. Naturally rich in collagen, it is regenerative in nature and also possesses anti-inflammatory and bacteriostatic properties. Many people find topical emu oil (like the Walkabout Emu Oil Liquid) to be curative for skin irritations and wounds, and also effective when applied as an everyday moisturizer.