Is Oatmeal Good for You? The Pros and Cons of Oatmeal - Radiant Life

There is something about the idea of starting the day with a steaming bowl of oatmeal that is just so pleasant and wholesome. Decorated with cinnamon, swirled with a splash of cream or dotted with fresh berries, oatmeal is a breakfast food that warms both the body and soul. Yet as homey and innocent this staple grain may seem, oats have caused quite a stir in the health community lately. While some people slurp down bowls of hot cereal and crunch granola day and night, others fend off these grains in fear of their high carbohydrate content and possible gluten contamination. So, who is right? Is oatmeal good for you or not? Let's look at the pros and cons of oatmeal to decide for ourselves. 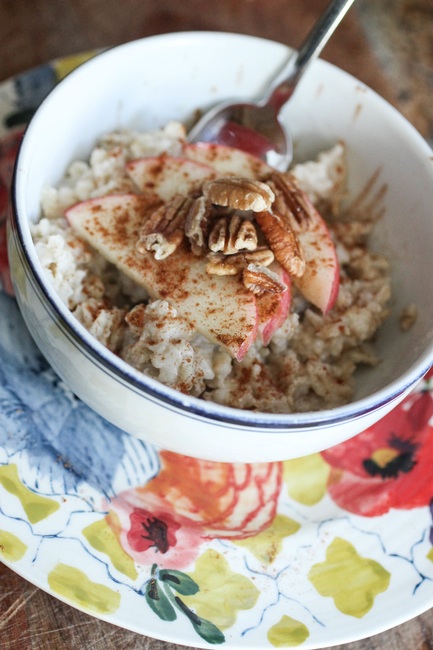 Oats, as we often think of them, are made from the hulled seeds of a cereal grain that is scientifically called Avena Sativa. As the most hardy of plants in their class, oats are known for their incredible ability to flourish in poor soil and survive harsh weather conditions. These robust characteristics have made oats a highly valuable crop for many traditional societies, particularly those settled in climates with volatile or unpredictable growing seasons.

Genetic evidence suggest that oats were first discovered growing wildly in Russia, northern Africa and throughout the Middle East. The various plant species were eventually domesticated however, and spread throughout the rest of the world, notably to Scotland, England and Ireland where they was adopted with great popularity. As such, it is believed that oats were even one of the very first crops introduced to Massachusetts by early settlers in the 1600's. The kernels are most commonly used by grinding and heating into the porridge we know and love as oatmeal. Other uses for oats however include milling it into flour for baking bread and other goodies, or as a stuffing for savory meat-based dishes.

Pioneering nutritionist and famed Dentist Dr. Weston A. Price noted the use of oats in the cuisine of several of the primitive populations he studied. In his work, he highlighted the creativity and prowess of one particular group of oat-eaters, a Gaelic community living on a cold and harsh isolated island. Of their fortitude he writes:

"The basic foods of these islanders are fish and oat products with a little barley...Oat grain is the one cereal which develops fairly readily, and it provides the porridge and oatcakes which in many homes are eaten in some form regularly with each meal. An important and highly relished article of diet has been baked cod's head stuffed with chopped cod livers and oatmeal...We saw fisher people with teeth of unusual perfection...One marvels at their gentleness, refinement and sweetness of character." Weston Price, DDS, Nutrition and Physical Degeneration

Beyond agricultural convenience, scientific testing has confirmed the nutritional value of oats to which Price eludes. In their whole form, oats are high in B vitamins including thiamine, riboflavin, niacin, pantothenic acid and folate. They also boast an impressive mineral profile with significant amounts of iron, calcium, phosphorous, magnesium and zinc. Naturally gluten-free, oats contain a unique soluble globulin protein that is overall much easier to digest than that found in other grains and far less irritating to the digestive tract. The soluble fiber content also contributes to improved digestive process and may even promote detoxification processes within the body. As an added bonus, oats include a powerful class of antioxidants called avenanthramides that have been shown in several studies to reduce inflammation when ingested or even when used topically on the skin.

In summary, "the good" about oats includes: 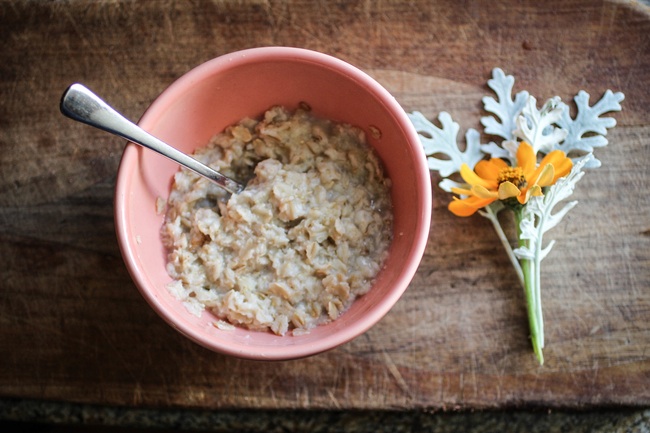 Although oats have been an historically valuable food, there is controversy over their necessity in the modern diet -- especially with the surplus of processed grains appearing on pantry shelves. As with many things, oats nowadays are just not the same as the trusty oats from way-back-when. After all, anything that is dumped out of a packet and slapped into the microwave is not the real thing. The introduction of high-powered processing, artificial flavorings and refined sweeteners has turned even a time-tested favorite like oatmeal into a cheap, sugary snack.

Oats also have some innate nutritional "glitches" that can undermine the aforementioned benefits if not dealt with carefully. For example, although oats naturally lack gluten, they do contain high levels of phytates-- irritating compounds found in many seeds as a survival mechanism to deter animals from eating them prior to germination. Unfortunately, phytates work to bind the minerals present in foods, rendering them unusable to consumers. In concentrated amounts, phytates can also cause difficulties in the gastrointestinal system leading to discomfort and irritation.

With the rampant rates of gluten intolerance and poor gut health found throughout the population today, it is also important to carefully consider the inclusion of any grains in the diet-- even those that are gluten free. Certain varieties of oats contain proteins that are so similar to gluten that the body has a cross-reaction. Oats tend to have more fatty-acids than other grains as well, which can increase risks of rancidity and exposure to oxidized fats. Furthermore, when not coupled with fat-containing foods (butter, ghee, raw dairy etc.), the nutrients in plant-based foods like oatmeal are very difficult to absorb, making them a largely "empty" foods. For these reasons, many people opt to avoid cereal grains in their diet all together.

Unfortunately "the bad" about oats are: 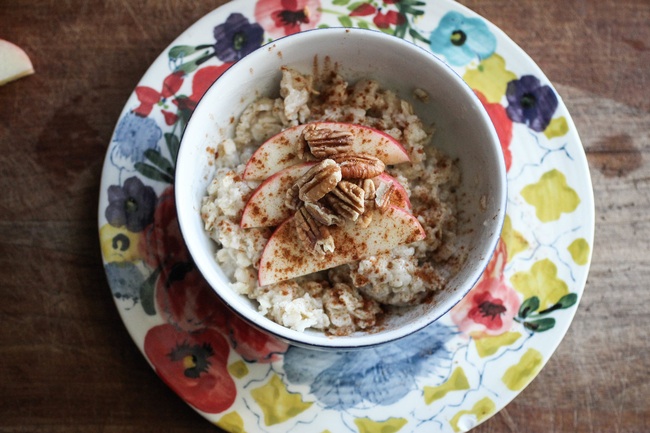 The Conclusion: How to Make Soaked Oatmeal

Given all of this information and history, it becomes apparent that there is no clear answer as to whether oatmeal is "good" for you. While some folks seem to do very well with a hearty helping of oats in the morning, the very same bowl can be troublesome to others who will thrive on more protein-dense options like eggs and bacon. We need to be aware however, that in order for any one of us to gain the potential health benefits that oatmeal has to offer, it must first be well-sourced and properly prepared to increase "the good" attributes and minimize "the bad." This can be done by mimicking the practices of traditional oat-eating cultures, like those observed by Dr. Price: soaking the grain in an acidic medium to neutralize the phytic acid prior to consumption. This practice minimizes the gluten-mimicking and gut irritation that other grains elicit. It may sound like a tall order at first, but once you understand how simple the soaking technique is, you can at least give it a try and see how it works for you! You may find that a food that previously bothered you, will become a viable option to include in your diet again.

Step One: Choose your oats

Oats come in packages of all shapes, sizes and colors. To make quality oatmeal, you will want to find the most wholesome option possible. Due to the fragile nature of the fatty acids they contain, oats stored in the open or in large containers are not always trustworthy. Bulk bins, although eco-friendly, should thus be avoided. If you have a gluten intolerance, be sure to source a variety that is certified gluten-free to start.

Best: Whole Groat - Entire oat kernels that have been harvested, hulled to remove inedible outer shell and cleaned. These must be milled or rolled at home using a family grain mill or other grinder prior to cooking and consuming. If you don't have any of these tools handy, skip to the option below.

Better: Rolled Groats - Sometimes called old-fashioned oats, these groats have been quickly steamed then flattened or "rolled" into flakes. This technique preserves the oatmeal for longer storage and also speeds up cooking time by increasing surface area. Rolled oats are readily found at most grocery stores.

Avoid: Quick or Instant Groats - are steamed at length or "cooked" at high temperatures and then pressed very thinly. Sweeteners and/or artificial flavorings are often added. With all of the processing and additives, these are considered a no-go in our book. Plus, these oats do not stand up to soaking, and will result in a mushy, disintegrating mess.

To neutralize the phytates inherent to oats they must be soaked in an acidic medium overnight. For more information, our friend Sarah Pope of The Healthy Home Economist has created and article and a video all about how to make soaked oatmeal that we find very helpful. The recipe can also be found in Sally Fallon's Cookbook Nourishing Traditions or by visiting the Weston A Price Foundation website.

Place oats in large bowl and cover with warm water. Mix in 2 spoonfuls of acid medium of your choosing. Cover and allow to sit out on the counter for at least 7 hours or overnight.

Once soaked, oatmeal cooks up in just a few minutes. Amazing! Serve with butter, ghee, coconut oil, coconut milk or cream to optimize absorption of the fat-soluble nutrients.

Strain off soaking water from oatmeal. Bring one cup of fresh water to a boil. Add soaked oats, reduce heat and allow to simmer for several minutes. Pour into a bowl and enjoy!

If you would like to save oatmeal for use in trail mix, bars or baking, simple strain off the soaking water and spread remaining oats on the sheet of a dehydrator (like this one) or parchment-covered baking sheet. Heat on lowest setting in dehydrator (or oven) for several hours, or until completely dry. Store in airtight container for future use.