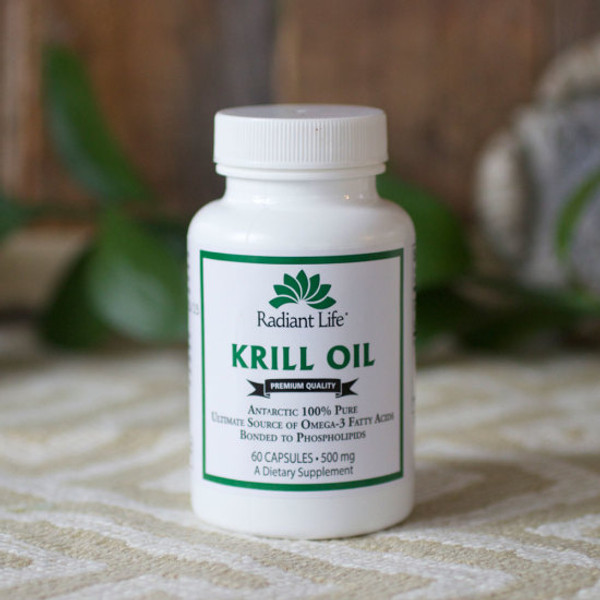 Radiant Life Krill Oil contains 100% pure oil from Antarctic Krill (Euphausia Superba), providing optimal amounts of omega-3 fatty acids and critical antioxidants including astaxanthin. Unlike the fatty acids found in other fish oils, the omega-3s in Radiant Life krill oil capsules are present in a bioavailable phospholipid form, which allows them to be easily absorbed by the body and highly effective at nourishing the cells. If you are looking for a viable source of omega-3s in the form of EPA and DHA, as well as a host of antioxidants, our krill oil 500mg capsules are for you.

Because krill reside at the bottom of the food chain and are harvested from the cold, clear waters of the Antarctic Ocean, there is less worry about the heavy metals and other toxins that contaminate many of our fish sources today. The Radiant Life krill oil supplement stands apart from other krill oils for several reasons. Not only does it contain high levels of important nutrients, but it is also free from unwanted, low-quality fish oils and other non-krill additives and pollutants. In addition, ours is an environmentally friendly krill oil produced via a new high tech, eco-harvesting method that ensures sustainable practices and prevents the death of non-krill species.

A. No! Refrigerating krill oil is not advisable and is not necessary to maintain its stability.

A. Not all krill oil is alike. We ensure that our Krill oil is not only the purest available but produced in a sustainable, environmentally-friendly way. Please read more under the Description tab.

Yes! Our Krill oil is produced via a new high tech method that: